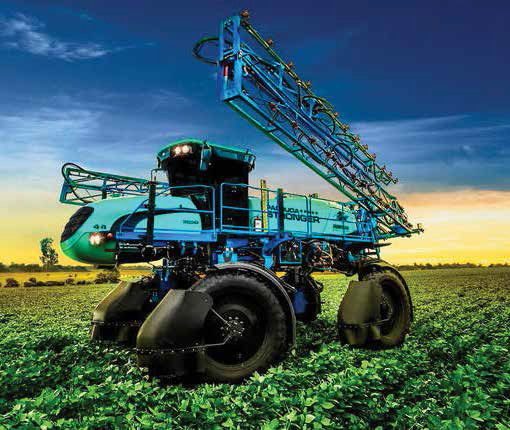 Valtrac’s new self-propelled Parruda Stronger has a ground clearance of 1.8 meters and a spray height of between 0.5 m and 2.9 m and can therefore be sprayed thoroughly from your youngest soybeans to your highest maize.

The name of the new generation Montana sprayer is not ‘Stronger’ for nothing. He is a proud Kuhn innovator and has brought the Parruda back to the forefront of spray technology.

On local soil, it is Valtrac that ensures that each of our farmers can lay their hands on such a Kuhn product. One such farmer is Henk Conradie from Ogies, who bought his first Parruda sprayer six years ago. Since then, he has been able to spray his soybeans and maize on his no-till and strip-cultivation lands at the right times without any effort or difficulty to control weeds and pests effectively.

“We use Roundup throughout on the weeds from before we start planting and spray Roundup on the soybeans and on the maize during the season shortly after emergence,” says Henk.

“Compared to my previous sprayers, the Parruda has an excellent calibration mechanism to put down very specific amounts of poison without constantly delaying itself. At the same time, its targeted application is also very accurate, ”he says.

“The old syringe gave me no reason not to buy one of the same kind again. I also know the syringe so well now and am now so comfortable and familiar with it that I can not help but buy the next version, ”he says.

“I saw the new Parruda at the Valtrac stall in Nampo. The men from Montana from Brazil were also there and showed me all the improvements that have been made to the existing sprayer, ”he says.

Henk paid close attention as the Brazilians pointed out the finer things that had improved. “The Stronger now has an almighty 1.8 m ground clearance. There are now no 90-degree bends in its hydraulic system – the sharpest bends are 45 degrees, which means the oil flows easier, faster and better and does not get hot. The new sprayer’s rear beam has also been reinforced and the Stronger is equipped as standard with the integrated GPS and Autosteer technology. The herbicide container can also be lowered to facilitate the application and eliminate waste, ”says Henk.

The poison pump is now made entirely of stainless steel. Furthermore, nine separate sections can be switched on or off while the syringe can place any liquid at as light as 10 liters / minute to a thorough 310 liters / minute exactly where it is needed.

The sprayer also uses much less fuel because it is equipped with pressure rail injection (common rail).

“I am very pleased with the excellent service I have received from Valtrac so far and I look forward to completely mastering our weeds with their help this season,” said Henk.

A giant step ahead for precision seed planting with Jumil