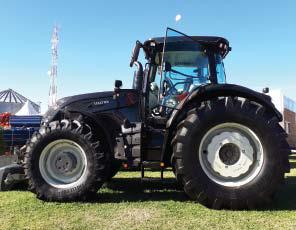 Valtrac is a bright star with new technology implements

Valtrac, a company with its head office in Parys in the Freestate, has a treasure chest of new technology and exciting innovative equipment, which the company wants to re-introduce to farmers. The new developments were already on show at last year’s NAMPO Harvest Day.

The Valtrac exhibition at NAMPO indicated that farmers were keen to see the machinery in action and also satisfied that the equipment could prove the claims made for it. The rural social media scene was agog with the news of the big new tractor from the Valtrac stable. The S374 is the crown prince of the S-series and a feature that will especially be praised by South African farmers, is the increased engine cooling capacity – a full 40%!

The 8,4 litre engine features the latest AGCO POWER technology, the best fuel consumption in this class, and seamless AGCO variable transmission. The cabin has the new award-winning Valtra SmartTouch armrest with a 9 inch touch screen on which all tractor functions can be monitored and controlled. With ‘drive lever driving’ the operator has smooth fine-tuned control over working speed and can adjust it seamlessly by means of the control arm. The Valtra harvester combine also elicited admiration. Devon Dedwith (left) says this novice will offer an excellent economic alternative with high work performance in the combine market, underpinned by Valtrac’s legendary service support. The Class 5 combine has a conventional transverse thresher drum with twin motors of 3,5 m each at the back for complete separation of the material.

Devon says the machine is uncomplicated with few moving parts and is able to harvest lands with high, as well as low, yields without any adjustments being made. The combine weighs only 12,4 tons and, because of its elementary action, results in a 20% saving in fuel consumption compared with comparable machines. It has a 7 000 litre grain tank and is fitted with a 198 kW engine. The combine exhibited at NAMPO had worked for about 50 hours before the show, but George Cilliers (right) says they plan to use the machine for a full season harvesting mealies and wheat so that farmers will be able to order it for the next season without any qualms about its performance. Years ago Valtrac was the distributor of Montana’s excellent Parruda sprayers. Three years ago Kuhn took over that company and this year the full development of the combined technology was completed. The trusted Montana sprayers now perform on par with world quality demands. George Cilliers says Kuhn investigated all over the world to quantify what the needs of their farmers were. Many practical and clever changes were made to the integrated (self-propelled) model. This high-riser, with its 1,8 metre ground clearance, has a 4 000 litre stainless steel tank and an aluminium boom of 36 metres. The beam is kept stable over any terrain by the Kuhn gliding equilibrium beam mounting.

The chassis embodies a double frame to make it extra strong, and the maintenance free Montana air cushion suspension guarantees a soft ride. Everything is quiet and most comfortable in the snazzy new cabin.

One of the changes requested by farmers and dealers was a system of automatic wheel tracking adjustment for different row widths. An operator can now adjust the wheel tracking by hydraulic control without leaving the cabin.

The Bosch drive system has been set to perform at 1600 engine revolutions per minute, which is a great positive for fuel consumption. The four wheels are driven independently and, when one of the wheels has to work harder, the hydraulic fluid flow to that wheel increases automatically. The same system is also used for control of pulling power control and the ABS brake system.

Sectional control of the beams have been made more efficient with direct control to each section, enabling the water flow to a specific section of a beam to be interrupted immediately. Water flow to that pipe stops abruptly. A safety feature is that the sprayers do not project underneath the beam, preventing breakage and unnecessary repair costs.

For more information regarding Valtrac’s ingenious technological solutions for the farmer, contact Attie de Villiers on 083-261-9863 or 056-817-7308, or send an email message to attiedev@valtrac.co.za .You can also visit the website www.valtrac.co.za .

Potato farmer agrees: Valtrac and Valtra nod out all the time

On your marks! Get set! Bale!